skip to main | skip to sidebar

Here's a Holy Hog tribute on his big day.

Posted by AustinChitoBoy at 8:19 PM No comments:

My bike, FoFo, hit a milestone. She turned over 14000 miles. I bought the bike at exactly 13000, so another milestone - I've been riding for 1000 miles. Here is where it happened.
Posted by AustinChitoBoy at 8:55 AM No comments: 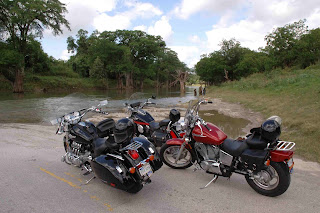 On this day, Jim, Don and myself went riding our motorcycles on the "Gruene River Road" ride (Kevin couldn't make it because he was going sailing with his daughter). The ride would take us through Wimberly, to US 281 (South of Blanco), around the West side of Canyon Lake, New Braunfels and Gruene and then San Marcos.

We started at the HEB on Slaughter Lane at 7:30 and fueled up the motors. The ROT Rally in Austin was in full swing and we anticipated a lot of the rider brotherhood on the roads. We took FM 1812 to Elder Hill road for a scenic ride to Wimberly. Elder Hill road was a with many turns and beautiful farm/ranch land scenery. The road passes by La Ventana, a very upscale subdivision in rural Hays county. With all the turn we barely got our of 2nd gear most of the time. The road also had alot of gravel, which made us slow down as well. Still the road was very scenic and worth driving again.

We stopped and ate breakfast at Wimberly's Cypress Creek Cafe. I had the special - two eggs, two pieces of bacon and a biscuit for $2.99. What a deal. We even got the waiter to throw in a couple of pieces of bacon and gravy with the deal. I knew I was going to be burning up the calories, so I ordered a side of hash browns as well. We all agreed that CCC would be a regular stop in the mornings for us.

After a nice breakfast, we got on our motors and headed west toward 281. Since it was the first of the month, we ran into a little traffic jam with Wimberly Market Days event. We to Fischer Store Road out to US 281. 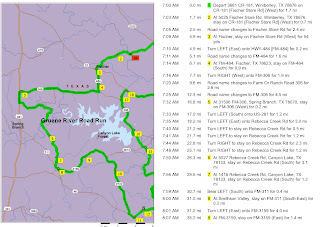 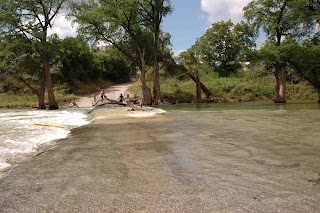 If you look closely, there were a couple of cyclist that crossed the water.

We met a interesting lady who you would probably see at Whole Foods a lot. She appeared to be very much into organic stuff. 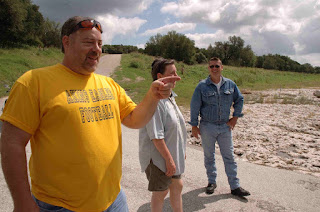 We had to back track onto 281. Then we headed out to Gruene. I really wanted to go to Gruene Hall, but the May rains and a low water crossing prevented us from getting there. We so so close as you can see by the picture. 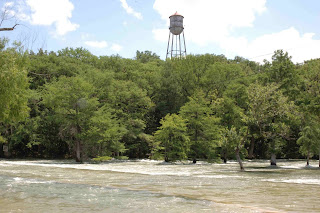 Disappointed, we went to nearby establishment and drank some beverages. From Gruene we when through Hueco (pronounced "Waco")Springs Road and River Road onto San Marcos. River Road hugs the Guadalupe River beneath a canopy of Oak, Pecan and Bald Cypress trees. This I would say was the most beautiful part of the ride. There's is camping and tubing places all around this road - Don's family used to camp around this area several years ago.

We then drove by the east side of Canyon Lake, Devil's backbone and 12 to San Marcos. 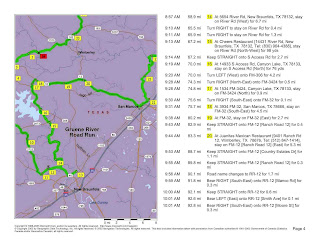 We stopped by the Canyon Lake dam. The very wet 2007 May was evident by these pictures of the spillway at the dam. 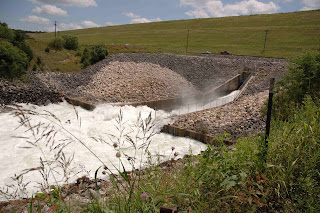 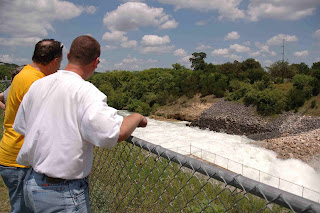 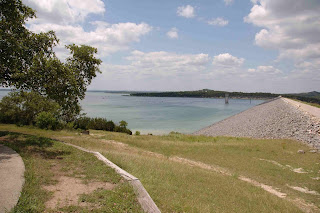 We wanted to checkout the dam overlook as well. Don lost his helmet off the back of his bike - he's always loosing something each trip :). Here's a picture from the overlook.

At San Marcos, I found the city the most pleasantly fragrant of all those during the ride. There was a sweet smell of flowers at several places in San Marcos.

We ate late lunch at the San Marcos River Pub and Grill. Lunch was good (although my Tilapia dish was a little overcooked). The restaurant had a great view of the San Marcos river. 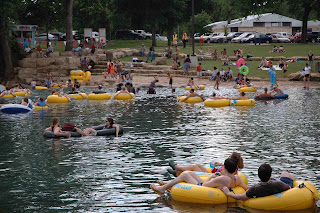 After lunch, we decided that we really haven't had enough riding yet. So we decided to cruise out to Wimberly again for some Ice Cream via Devil's Backbone (since the landscape views were pretty nice). We had Blue Bell ice cream at the Old Mill Store. I think that this place too will be a regular stop on our rides.

We stopped at a roadside picnic area on Devil's and took in some views of the hill country. Another group from the ROT Rally was there (we saw hundreds of bikers during the trip). 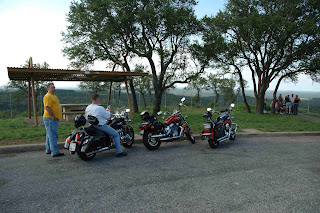 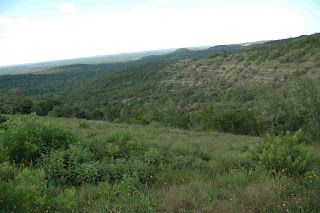 At the park, Don had to suddenly take off for reasons I can't discuss. Nonetheless, this spot (where we lost half of the map) will probably live on in infamy.

We ended the ride by going back to San Marcos on to South Austin. We tried to take Lime Kiln Road, which according to our map (what was left of it) and GPS would take us to I35. However the last 1/2 mile was private and we had to backtrack and take another route.

By the time we all got home, it was a 13-14 hour ride. We were exhausted and had some aches at the hips, but very happy that God gave us this day to ride.

This is the day the Lord has made; we will rejoice and be glad in it. —Psalm 118:24
Posted by AustinChitoBoy at 5:51 AM No comments:

This ride started at Dan's Hambugers at Manchaca and Ben White. This is our second time starting this way, so I guess it is our tradition now. Our entire group was ready to ride - Jim, Don, Kevin and myself.

From Dan's we took Hwy 71. At Spicewood we to a farm to market road side road. The wildflowers were plentiful and made the ride very enjoyable. The cactus plants were blooming their brilliant yellow flowers. I wish I had brought along my camera to capture the images. 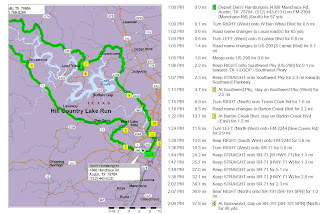 Heading back to Marble Falls on 71, Jim did his characteristic "speed run" on a straight, flat stretch of road before 281. I hit fofo's throttle until hitting 95 mph. At that speed my feet started to float of the foot pegs... it was a weird sensation, so I let off the throttle. I think Jim's speed runs will be a Holy Hog tradition too - yeah!

At Marble Falls we spent time looking to a place called "2 Alarm Chili" for lunch. We never found it and decided to eat at Sonic instead.

At Sonic we had a devotion based on a Casting Crowns song "Does anyone hear her" from the Lifesong album. All the riders in the group are fathers and have daughters, so I think the devotion was very relevant. We all need to understand our daughters better in today's culture, and we all need to be more accepting of hurting people coming into The Church. Do you have 4.5 minutes to check out the video?

From the Sonic at Marble Falls, we took FM 1431 back into North Austin. The stretch of road between Marble Falls and Lago Vista was absolutely breathtaking. I really wish I had my camera. The wildflowers along the side of the road were in full bloom. It was a winding and hill two lane road and the flowers look at like carpet or sea of yellow, reds and occasional blues. God's masterful hand in creation was compellingly evident in the spectacular beauty of this 25 minute part of the ride. It was so awesome we had to pull off the road and just take in the beauty of the scenery - Thank You Lord!

The rest of the trip took us through Central Austin and back to Dan's.

It was a great ride with great group of guys through God's great creation.

"Come to Me, all who are weary and heavy-laden, and I will give you rest. Take My yoke upon you and learn from Me, for I am gentle and humble in heart, and YOU WILL FIND REST FOR YOUR SOULS. For My yoke is easy and My burden is light."